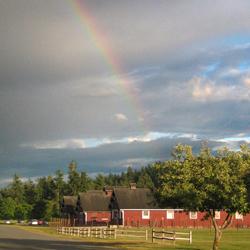 Somewhere, under the rainbow…good times were had. 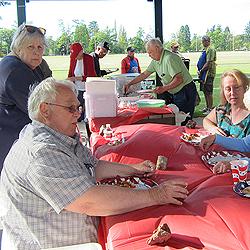 Lakewood Historical Society is up to any challenge.

Their picnic in the park on June 18 was threatened by high winds and dark skies, but LHS members didn’t let those elements discourage them from enjoying the gathering that evening at Ft. Steilacoom Park’s Rotary Picnic Shelter.

A big thanks to the trio of Clover Park Kiwanians who served up the tasty hot dog main dish that complemented plentiful offer-ings, contributed by more than 30 picnickers. (Loved those deviled eggs, Barbara!)

Just as things were winding down, big raindrops began splashing the ground as people dashed for their cars. Then the sun broke through, casting a huge rainbow over the scene—sort of like a mythical rainbow bridge from some super-epic blockbuster summer movie. Oz, maybe? Where’s the Lion, the Scarecrow and the Tin Man?