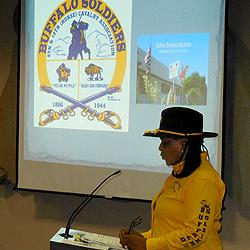 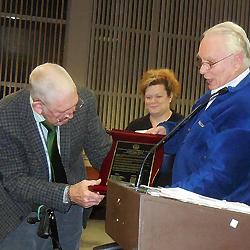 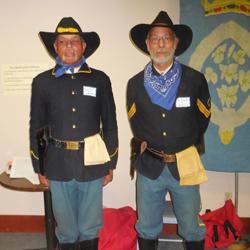 The Society held its Annual Meeting with the election of board members and shared the year’s accomplishments. But the highlight of the meeting was honoring several Society members for their contributions to the 15-year-old organization.

Lt. Gen. Bill Harrison (USA ret.), who has retired from the board after five years of service, was honored with the naming of the Society’s Leadership Award. He was further recognized and “promoted” to director emeritus status in recognition of his years of service to the Lakewood community and the Society. LHS’s treasurer Gary Fowler was honored to receive the award.

Society co-founder/director emeritus Cyrus Happy III was honored with the naming of the Society’s Historian Award. Former Lakewood Journal Editor/retired Society board member Walter Neary was tapped as the 2013 recipient for that honor.

The Journalism Award was named for the late Dave Sclair and was presented to his wife Mary Lou Sclair and son, Ben. Carol Moreno, a Lake City resident, was honored as the Society’s Volunteer of the Year.

After the short business meeting, the featured program on the history of the Buffalo Soldiers was presented. Although a pair of local Buffalo Soldier re-enactors offered to bring horses to the program, the men, 1st Sgt. Leonard Howze, joined by Trooper Larry Horne, compromised with a display of a McClellan Saddle, saddle blanket and saber. The Buffalo Soldiers wore authentic 19th century cavalry uniforms and displayed artifacts and mementoes.

Jackie Jones-Hook, curator of Tacoma’s Buffalo Soldier Museum (only the second such museum in the country) told the audience about the Museum’s founding by her late father, William Jones, who had served in the Buffalo Soldiers 10th Cavalry regiment during WW II.

The Buffalo Soldiers were originally organized in 1866 and saw service during the decades until 1944. African-American soldiers were segregated until President Harry Truman integrated the Armed Forces in 1948.

The soldiers’ courage, honor and dedication to duty was tested from frontier days protecting settlers, as stage coach security, fighting fires, and serving as National Park rangers, to fighting in the famous San Juan Hill battle, and onward until WW II.

The Buffalo Soldiers Museum is located on 1940 Wilkinson St. in Tacoma (above the Atlas Foundry).  Jones-Hook said that it is open from 11 a.m. to 3 p.m., Wednesdays and Saturdays. Visit the Buffalo Soldiers Website or phone 253-272-4257 for further details.