A Wonderful History and a Promising Future

Relating a bit of CPTC\'s history 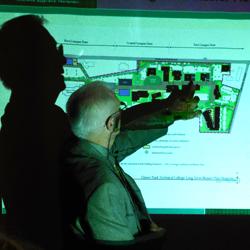 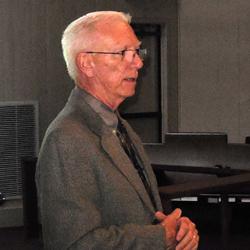 After describing CPTC's mission, programs and student body, Dr. Walstrum narrated a series of slides illustrating various uses the property now occupied by the college has been put to over the last century. From 1912 to 1922, it was the Tacoma Speedway, a two mile wooden track hosting auto races second only to the Indianapolis 500 in importance on the circuit. The track, falling victim to an economic downturn, was replaced by the Mueller-Harkins Airport in the late 1920’s. In 1944 it became the Navy Advance Base until the end of the War.

The original Vo-Tech School was built on the campus of Clover Park High School in 1941. It not only provided World War II draftees the opportunity to attain their high school diplomas and learn vital skills needed in the military, it trained the large civilian workforce needed for the War effort. The school moved to its current site in 1954. It finally separated from the CPSD in 1991.

Never losing sight of its goal--to provide training and education sufficient to enable its graduates to find steady employment at a living wage--the College renovated existing buildings and constructed new ones as it evolved to keep pace with the ever-changing requirements of the American workplace.

Dr. Walstrum closed with a look at some of the programs that have changed most dramatically to meet the challenges posed by new technologies and other innovations, focusing specifically on CPTC's Health Sciences and Aerospace Programs.

An overview of the school's near-term and long-term master plans left the distinct impression that CPTC will become an ever more important asset to the community--and the nation--as the years go by.